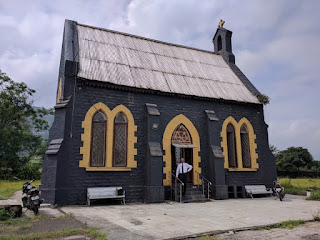 It was a very small stone church tucked away in the hill locked village of Paud in Pune. It had only 10 pews with a total capacity of 50 people. Still the church was not full that day. Among the congregation, more than half were kids of all ages.
I had just returned to the altar after passing the peace among the congregation. I passed the peace to all in the congregation adults and small kids as well.
Then, I heard a cry from the congregation. It was feeble in the beginning and then got louder. My mind was so engrossed in the service order than the crying little girl. Then I noticed the adults giggling. So, I turned to my assistant to find out what is going on.
He told me that the little girl is so sad that I missed her in the passing of the peace! I had taken care that I passed the peace to everyone, but some how this four-year old was missed. I don’t know how. So, I immediately walked down to her and extended my hands. However, she turned her head away in protest. I tried again but her cry got louder. The mother then took her out, and she stayed out for the rest of the service. Her mother missed the Communion service as well.
After the service, I joined a family for lunch. Over the lunch, I was told that Sara’s parents live next door. So, made it a point to visit her, say sorry and cheer her up. Her elder brother and sister came out of their little house to greet me. But Sara was not to be seen anywhere. She had spotted me walking towards her house and she had resolved not to meet me. I called her out, she won’t budge. Then I forced myself into her house. There she was, in a chair, refusing to give me the advantage of an eye-contact. She has nothing to do with the pastor who ignored her in the passing of peace.
See also, Let the Children Come to Me.
at September 11, 2017