Let the Children Come to Me 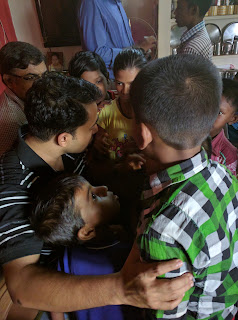 ‘And they were bringing children to him that he might touch them, and the disciples rebuked them. But when Jesus saw it, he was indignant and said to them, “Let the children come to me; do not hinder them, for to such belongs the kingdom of God. Truly, I say to you, whoever does not receive the kingdom of God like a child shall not enter it.” And she took them in his arms and blessed them, laying his hands on them.’ (Matt 9:14-16).
When Jesus took the little children in his arms, they might have told him something. What would they tell him? I was thinking about as it as I watched one of our team members ministering to little kids in a slum in Pune. He had just told those poor kids gathered under a tin-roofed hall a story about Jesus. Some children responded in faith and wanted him to pray for them. I was around, and listening to their requests. Some wanted Jesus to stop their father’s drinking. Some kids said that their father had deserted them and they want Jesus to bring him back. He might have eloped with another woman in the slum. Some want Jesus to change their father’s mind. He returns from work in the evening drunk and beats up their mom and threatens them.
The disciples rebuked the people who brought the little children to Jesus. However, Jesus took them in his arms and blessed them. They have stories to tell, stories of pain and rejection and also hope. These children live in utterly poor conditions hoping there is a better tomorrow. Every child has a story to tell Jesus, stories of pain, rejection and lack. That is why Jesus told them, ‘Let the children come to me! Do not hinder them.’
at June 18, 2017

"Therefore, my beloved brothers, be steadfast, immovable, always abounding in the work of the Lord, knowing that in the Lord your labour is not in vain." (1 Cor 15:58 ESV).
There are times when various factors bog us down. Especially in Christian ministry, there are oppositions, discouragements and a whole lot of things that makes feel like giving up.
If anyone had been through such circumstances that push you to the edge of giving up it was Paul. He had opposition from fellow apostles, enemies of the Gospel and even the churches that he planted. However, he kept going, excelling increasingly irrespective of the adverse circumstances.
His advice to anyone who is discouraged and tired of the work for the Lord is first to be steadfast. Steadfastness is that quality of sticking to the one thing irrespective of all that make us think or act contrary. One of the temptations that happen when faced with the opposition is to think if we are doing the right thing, have I gone wrong somewhere. Though this is a useful reflection and we may need to check and recheck if we are on the right path, an unsettled behaviour is not helpful. Once we have received the commission from God and if that is constantly being affirmed by the Lord, we need to stay put in what God has entrusted us with.
The second aspect is also related--being immovable. This in fact reinforces the idea of steadfastness. However, it also carries with it the idea of resisting the pressures on us. It carries with the notion of staying firm in spite of all that try to move us from what we are doing. This may come in various forms. However, we need to withstand the storms that battle against us so that we will be found doing what God has asked us to do when the storms tare away.
A third aspect is abounding or exceeding in what we are doing for the Lord. When there are battles our efficiency goes down considerably. The people whom Nehemiah led had to carry the sword in one hand and build the walls with other because of the threat of the enemy. It surely has a negative effect on their output. However, they completed the walls according to the plans as per schedule. This can happen only if we double efforts in the service of God.
There is yet another aspect to 'abounding.' That is to do more than what is required of us. Not to be satisfied by what the rule book requires but to go beyond our employers' expectations and even our expectations to please the Lord.
The motivation comes from the fact that we are not just made for this world. Paul comes to these words of exhortation after elaborating on life after death, resurrection, nature of the resurrected bodies and the believers' victory over death. The ministry that has this awareness that we are not limited by this world, that looks beyond the experiences of this world will be steadfast, immovable and continue to abound.
at June 12, 2017