I had been praying for a revival in the Seminary where I teach and the church I minister for a long time. It hasn’t come yet. I got this burden for revival from my teacher. She was a Canadian missionary who taught English at the Seminary where I did my first degree in theology. She stood up in a social gathering to make an announcement. The college was about to be shifted to a new campus about 600-kilometres away in a few months. She said that she is praying for a revival and praying that we will have it before we move to the new campus. It is almost 33 years since we moved to the new campus. Revival is yet to come!
Is God ignoring prayers for revivals? For that to be true we need to conclude that God is against revivals. Certainly not! God always want his people to be spiritually alive and constantly revive themselves. Holy Spirit, the spirit of newness is always with us.
This is simple logic. I won't' buy my son a car until he gets the driving licence. That is when he is ready to drive though he has been asking for it for a long time. I think that is the reason why revival tarries. Revival is certainly God’s plan for his people. God never denies prayer for revivals, but it gets delayed because the potential recipients are not yet ready. I want to emphasise it again—it is not denial but delay and we are responsible for the delay. Revival will come only when we are ready.
A review of the history of revivals tells us that that is how it always happened. Revivals always happened only through people who were waiting for it. Take, for example, the pouring out of the Holy Spirit upon the 120 gathered in Jerusalem. Jesus had directed them ‘to wait for the promise of the Father’ (Acts 1:4). Waiting, they did! They went to the upper-room, they were in one accord and devoted themselves to prayer (Acts 1:14). Finally, when they were ‘altogether in one place’ in the same upper-room the Spirit was poured out on them on the day of Pentecost (Acts 2:1-4).
This pattern of waiting and preparation in prayer along with a longing for revival is behind all revivals. Sometimes God prepares them in strange ways. For example, the Ao Naga revivals in India was possible because a tribal chief dead and gone had prophesied that a man with white skin will come and preach about a new god and they have to follow that God. The people were waiting for the man with white skin to come and preach for years. The tribal memory of this prophecy was like a piece of charcoal soaked in fuel, ready to catch fire. It caught fire and covered the entire Ao Naga tribe. Now 90% of Nagas are Christians. There are similar stories of God preparing people from Malaysia and other countries.
In any revival, there is a group of people earnestly waiting and praying for it. Prayer and the longing had prepared them to receive it. Then in the process, the revival encompasses in its embrace everyone even its critics. The first flame always fell upon an individual or group who were ready for it. It is like a forest-fire starting beginning with an ember from the bonfire the careless campers didn’t put out. It started really small with a group of people longing for it.
It never happened when people are not ready for it. All that we need to do is to be ready.
at August 26, 2016 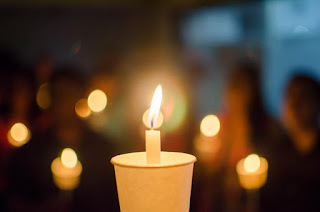 Our language of prayer has changed dramatically over the years. When people come to us with their problems we used to assure them that we will pray for them. Sometimes, we say ‘I will pray for you’ or sometimes we say, ‘you will be in my prayers.’ In reality, we often fail to keep the promise and forget to pray for them. Still, we keep saying that; it has become part of our formal language, like ‘thank you!’ We say that even when we really don’t mean it. It is like saying ‘good morning’ to our neighbour as we step out of the house in pouring rain on a clouded, bleak morning. So meaningless.

However, many people have polished this language now to be more honest and be real. It is rather popular now to say that ‘you will be in my thoughts’ than ‘in my prayers.’ That helps us to bail ourselves out of the guilt of not praying.

A promise of prayer is sometimes the best way to dismiss responsibility. Many times when we approach authorities and they say that they will pray about it, you can go home pretty sure that you are not going to get it! The language is so corrupt, it is something to hide behind and to dismiss the action.

However, Jesus seems to have given it a new meaning in Matthew 9:38. On his return from preaching the Kingdom of God in the various villages and towns in Galilee, he told his disciples what he saw over there. He had compassion on them since they were helpless like sheep without the shepherd. He also said that the people are ready for the goodnews of the Kingdom. Then he asked them to pray earnestly to the Lord of the harvest to send out labourers into his harvest.’ (Matt 9:38).
However, they did not have a prayer meeting after that! In the following verses (which is continuous with the previous, though in a new chapter) Jesus called them and sent them out to the fields that are ‘ready for the harvest.’

What do we make out of this? When Jesus said ‘pray’ to send, he really meant be ready to go! For Jesus, praying is preparation for going and nothing less. It is not praying that people other than the one who pray will go. It is a prayer where the one who prays gets ready to go.

Jesus looked at the world around him in a way that is quite different from that of contemporary Christians. In India, Christians are constantly intimidated by the news of persecution of Christians in various parts of the country. Laws that hinder preaching the gospel are passed in many states, pastors are attacked, churches are destroyed, etc. These pieces of news do make us view our world that is hostile to the gospel and the kingdom of God.
However, there is another way of looking at the same world. That is the view of Jesus. Don’t imagine that Jesus’ world was not hostile to him. He was ridiculed, physically attacked, finally killed. Though he had his share of enemies who from the very beginning was plotting to kill him, he looked at the same world as the world ready for the rule of God.
Jesus told his disciples that the world is ready for a big harvest. ‘Do you not say, There are yet four months, then comes the harvest? Look, I tell you, lift up your eyes, and see that the fields are white for harvest.’ (John 4:35, ESV).
It is true that a cereal crop like rice, wheat or barley takes three to four months to grow and ready for harvesting. But when Jesus says that the harvest is ready right then, before four months are over he implied the readiness of human hearts for God. Disciples waiting for the process of growth and fruiting, but Jesus says don’t wait for the process is already over and it is ready.
This is a real challenge. We have to have to have a positive outlook on the world we live. Christians should overcome the negative thinking that everyone out there is looking to kill us. No, they are looking for life. They have questions of life for which they are seeking answers. They have crises in life and are looking for solutions. The bible has the answer to all these but someone should go to them and tell them.
Here is the ready harvest. You will find them in your office floors, in the person sitting in the cabin next to you. Maybe the person sitting near you in the metro every day on the way to office is another heart that is ready for the harvest. If we don’t reap the standing corns of grain will be lost forever. It is time to get to the harvest.
at August 05, 2016 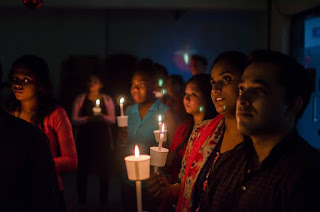 The Second coming of Jesus Christ is not a popular topic these days. Even preachers in premillennial or dispensational etc, also do not seem to talk about it these days.There could be various reasons for this trend. First of all, it seems the satisfaction many Christians feel now in the present world situation. The topic of second coming had served to a large extent to cope with the pain and suffering of the present day. People could live with their sufferings now since better days are coming. Secondly, it has to do with the aversion to the details that the preaching always came with. It seems that people are fed up with the lack of consensus in the identification of the Anti-Christ, number 666, the number 144,000 and such fringe elements. The irrationality and subjectivity of such interpretations are increasingly questioned. Preaching on the second coming in the days gone by focussed on details  for which there are no strong biblical warrants. So, over the years it has become the very unpopular topic.
However, Jesus' own teaching on his second coming was largely ignored. Jesus' second coming is an important part of Christian gospel. As long as we stick to the core teaching on this topic and avoid straying into unwarranted details. Preachers should not preach more than what Jesus preached. They should stick to the core teaching on this topic and avoid straying into unwarranted details.
There are certain things that are central to Jesus' teaching on his second coming. The first is the certainty. He will come. The second is unpredictability. He will come at a time that no one knows.
While teaching about the future of Jerusalem and his second coming Jesus told his disciples three parables in the Gospel of Matthew (Chapters 24-25). These three parables emphasise three aspects of Christian behaviour while waiting for the Lord to come. The first is the parable of the Wicked Servant (), the second being the parable of the ten virgins (), the third being the parable of the talents (). These three emphasise three important things. The parable of the wicked servant warns misbehaviour that results from ignoring the master's coming. The second (story of ten virgins) talks about the possibility of missing the joy of his coming not being ready for it. The third emphasises that the time of waiting is a time of productivity.